Soils : Clay schist and stoneware on the municipality of Martigné-Briand

– Wait of an optimal maturity and grape harvests after the heat wave of the summer, 2003 in the first days of October.
– Total of grapes, vibrating table of sorting behind the égrappoir and the adaptation of the conditions of maceration in the year Egrappage (control of the temperatures enters 27 and 33°c, lasted extraction of 18 days).
– At the end of fermentation lactic malo, aerations and rackings repeated to value all the experiences (color, aromatic complexity, structural skeleton).
– Assembly between the various tanks and the vines, then filtrations and bottling in spring.

The dress of tint dark garnet possesses almost black reflections.
The very powerful nose releases aromas of red berries and caramelized blacks (blackberries, strawberries, blueberries), then notes  of money wood (humus, fern). In finale of the notes  of Zan and roasting confirm the beautiful maturity of vines.
In mouth, the attack is round, almost fleshy. The gustative scale is supported by a fine network of tannins which strengthens the structure while allowing ita serene guard. The weakness of the acidity on this « anachronistic » year strengthens the curvature and the structural velouté.

Been of use with a preliminary aeration of one hour and to a temperature of 17-18°c, this wine will accompany : 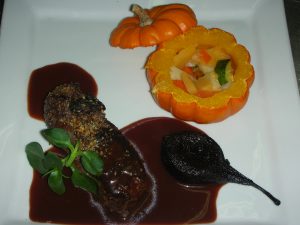 Being able to be consumed in its youth (from 2 to 3 years), this wine will beware nevertheless with no problem at all 8 – 10 years.